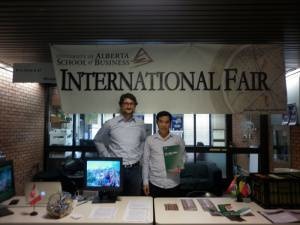 On 31st, August 2014, I was on plane heading towards Alberta, Canada for 1 year exchange. I have been so passionate about this great country and its people since my early childhood. Living and studying in Canada, for me, is just like a dream coming true. I was so excited to discover new things on the other half of the earth while remained unknown what was waiting for me then.

I arrived at Vancouver International Airport at 8 p.m after 15 hours flight. It was quite warm then and the sun did not actually set until after 9 p.m. It took another 3 and a half hour to fly to Edmonton, Capital city of Alberta. When I got there, it was almost 2 a.m. Aurie, my landlord, took me home in his van and put me in a big room in his house South West of Edmonton. Next morning he toured me around the city and shopped some basic things.
At first glance, Edmonton is a very peaceful city. Big houses, large roads, a lot of trees and open spaces are common theme. The city is home to more than 800,000 people. A lot of them work in oil and gas which is the backbone industry in Alberta. The main method of transportation is probably car. Public transport in Edmonton is alright. It is organized like fish bone with a single train / subway running East – West connecting major business centers and institutions. Integrating to this backbone is a dense network of buses which go virtually to every corner of the city. Most people have the so-called U-pass to commute to work. For bus, the driver will check your ticket when you get on. For subway, there is no system in place to monitor if you buy a ticket. However, now and then inspectors will check on the train, once they find a free-rider, they gonna give him a $250-ticket.
I was hit immediate by the diversity of the region. So many nationalities live in this country. Of course it is North American land, but I can see Chinese and Indian as very big communities. There are also big bands coming from Nigeria, Mexico, Sudan, Vietnam, Indonesia and everywhere. Food concepts are therefore diversified. McDonald, Starbuck, Tim Horton are at arm’s length. I was so surprised to see how easy it is to find Asian food. In Japan, no place sell fish sauce, here it is everywhere. Most super markets have a section called “Oriental” or “Asian” to sell Asian specialties and ingredients. On the north side of city, the yellow lights on the banner of Chinese restaurant at dawn recalled me of the very China Town in Saigon.
All American major retailers are in Edmonton. Wal-Mart, Tesco, Superstore, Safeway, IKEA are just about 5-10 minute drive. West Edmonton Mall is by far the largest shopping mall, concentrating most sophisticated fashion and food concept. Overall, I guess cost in Edmonton is about 5-10 % cheaper than Nagoya.

University of Alberta, School of Business

University of Alberta (UofA) is one of the biggest of its kind in Canada with a tradition of more than 100 years. The University is ranked among top 100 globally in almost all ranking. Geographically, it is huge with 4 campuses: North Campus, South Campus, Campus Saint Jean, and Campus Augustana. The University hosts almost 40,000 students yearly. Most of education activity is taken place in North Campus.
The School of Business is well situated in North Campus. It is a 5-floor, classic brick and mortar building. Most classes are held in this building, some classes are in the other building nearby. Right on the basement of the building is Winspear Business Library having capacity of up to 300 seats. Next to it is the lab rooms with more than 200 hundred computers. The MBA lounge and MBA labs are special treatment for only MBA students to do research and have group discussion. This year the business school has 172 MBA full time students from 18 countries, mostly from Asia and America. I have seen some European students, very few of them are French. The cohort in MBA class is mature. Most of students are in their 30s having 7 or 8 years work experience. Discussion with them has always been very deep as they bring in industry knowledge and issues. They all consider MBA as a serious investment and put in their time and money accordingly. Competition among students are high, all students fight for a limited amount of time to present ideas and argue.
Courses at UoA are twice a length at NUCB. Each course is 13 weeks long with a 3-hour session. It is a combination of night time and day time courses. 3 out of 5 courses I am taking this semester are in night session. This reminds me the flavor of executive MBA I was having at NUCB. Unlike NUCB, most of the courses here are theory based and centered around the professors. Reading is quite heavy; some courses require reading extra research papers for discussion. Failing to do this, it is impossible to catch up with classmates. It is a lot of work, but, well, “what’s important is you learn something at the end of the day”.
UoA is fortunately to have the best professors, I would argue. We have the best Canadian lawyer for the law class, one of the best finance researchers for a finance class, a director of consulting company for the advising class. Professor can expand and tackle the most complex issues. He can extrapolate far beyond course contents. It may be hard to follow in some cases without a specific context and a preparation.
Students at UoA have a fast paced and dynamic life. Believe it or not, from 10 a.m. in the morning all 300 seats in Winspear Library are taken. The school has special connection with outside world. Every week, there are speakers coming to school to deliver seminars to students. Guests are people from Alberta government, business world, and international guests. Topic covers as far as entrepreneurship, startup, energy policy, financial management. And as usual, it is hard to find a seat without prior booking. Several student clubs are formed accompanying each specialization. I am enrolling in NREE which is a body for energy specialization, entrepreneur club, and Family business association. Clubs develop activities and networking events for member. The entrepreneur club guides its members to turn ideas into startups and connect the idea to venture capital firms in the town. It’s so much fruitful to involve in club activities. If only I have more time, I wish I can be member of as many body as possible.
It would be a big mistake not to mention UoA career office. Why? They did great job as far as I know. The business school has a great course called “Business Orientation Skill”. Along the course, students are guided on career goal setting, writing an amazing resume, fulfilling career path, interviewing skills, mock interview, optimizing on Linkedin… The school is committed to giving the students the career they wish. Every week, there are companies coming to the school recruiting students. I can name a few like Mckinsey, PWC, EY, Shell, Exxon…All students enjoy talking to their potential employers. I enjoy eating employer’s pizza, it is simply the best kind out there.
On Sept 24, UoA organized the career day. Imagine a stadium full of employers (maybe over 200), the dynamics and interaction was so amazing.4. International Exchange Office
Headed by Mic and his assistant Jessica, the international exchange office helps exchange student get used to life in Edmonton and works as a cultural hub. We received warm welcome on arrival from the office with a barbecue party where people get introduced and oriented. Later on Jessica took us to a football match between Edmonton Eskimos and Winipeg. It’s American football, not the kind of football at UK. It was my first time. I could not imagine the FOOTball where people use hand to play. The goal is as big as the width of the field. Scoring seems easy but is actually difficult. Each player keeps his opponent in the loop and teams have to patiently crawl by each meter to the other side to have points. It was so much fun. An easy win for Eskimo and I was so proud of Edmonton as the 2nd top team in CanadaThe exchange office organized an international fair to encourage its student exchange to partner schools. Quite a few students were interested in international study. Japan came as a natural destination. I was so lucky to talk to some of them about Japan, NUCB Business school, and something I know in Japan. Some of them had explicit to discover unique Japanese culture. 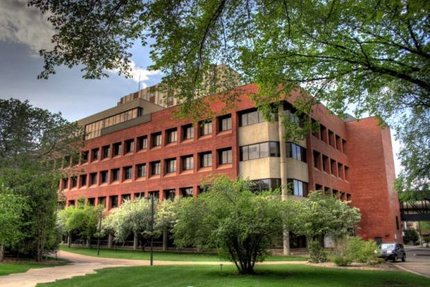