Best time of the Year

I arrived in Edmonton on September. It was in the middle of the autumn then. The green was still on the trees mixing with yellow and red leaves. It was beautiful. Edmonton was cool during last fall with a temperature of 17-18 o C which was perfect for jogging – my biggest hobby. This place had the most awesome walking trail I have ever seen. The trail is on top of the hills, surrounds the community, and runs along a small river. 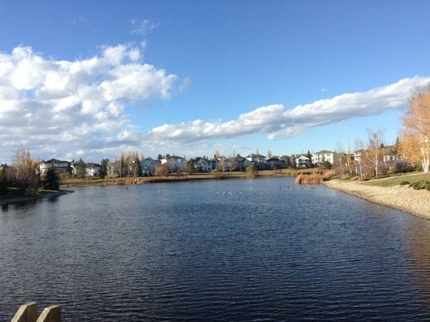 There are so many trees and squirrels along the trail which evokes a mysterious feeling. Running towards the ends of trail, I happened to know that I was standing on top of a hill with a forest beneath my feet. The view was so broad, so far, the air was so fresh, the people were so nice and so few (along the trail). Awesome, awesome. This turned out to be my favorite place to get relaxed and find some sunlight during my first 3 months.

The winter came at the end of November. Although I received some prior warning on how bad winter could be, this did not stop me from having unexpected surprise. Snow started falling during the night, and the next morning the whole city was in white – 25cm deep. And the white has been staying there until sometime around next June. Wow, childhood dream came true, I should have been happy.
To get you some sense of the winter in Alberta that I am experiencing: (1) the sun raised at 10 and set at 4.pm in December. We had less than 6 hours of sunlight at the beginning, now we have 9 hours. (2) It is not unusually for the temperature to go below minus 20. My friends warned me to check if my accessories (ears, nose) still working when I walked outdoor for 10 minutes. (3) Buses are not always on time. Waiting 10 minutes at bus station is a disaster since you won’t feel your legs anymore. Trick is to wear thick, wear warm and wear boots.

Edmontonians have a very friendly view toward snow/winter. People were not so comfortable seeing less snow this year than usual. Many family activities are organized to celebrate snow. Some people are really crazy – they played winter ice bucketing when the temperature reach 0 oC. To them winter is just scary if you just stay in warm places screaming of the cold outside. It is true. Getting out, playing with the snow, building a snowman, snow shoeing and watching a hockey game are the things that helps me feel Canada and makes winter much more entertaining.
Life was hot at U of A campus though. The mid-term exam started somewhere in November. From the first mid-term, student experienced a fast-paced life with the 2nd mid-term, take-home essay, case analysis, team work presentation… Final exam was a hard time for most students. It was common to see students nodding on the train with bruised eyes after weeks lacking of sleep. It was also common to see lazy kids staring at their cheat sheet making sure that they do not drop any memory on the way. I was with my Chi Chi during exams with might signal something. The HUB mall is well designed for a busy life. When students do not have time to cook, they can go right there grasping some food. I changed my conception on North American food since I arrived in Canada. Canadian food is not about burger, it is about diversity. I enjoyed the Mexican Burrito, Canadian Fries Poutine. The Chinese chicken rice is good, so is Thai food and Korean food. All foods in the world are exhibited in this HUBmall building. Unfortunately, I could not find a sense of Japanese Ramen that I often had with my Mexican and Indonesian friends right in front of NUCB Business school.
Some of the fancy activities happened during this time. First was the business plan contest for undergraduate students hosted by Matthew Grimes – Prof. of Entrepreneurship and E-club. As a member of E-club, I was also involved with the events. Several groups of students pitched their ideas to a group of investors. Winner received a financial award and had the opportunity to get seed capital. Right from the first time hosting the event, E-club received good reputation for bringing investors to classroom and promoting entrepreneurship in the province. Second event was organized by the exchange office. Jessica took us to the root of Canadian culture by having a meeting with the director of the Oiler King – a junior hockey team, to find out the business model of this traditional sport. We felt in love with this gorgeous sport immediately after seeing how fast, how flexible and how competitive it is. 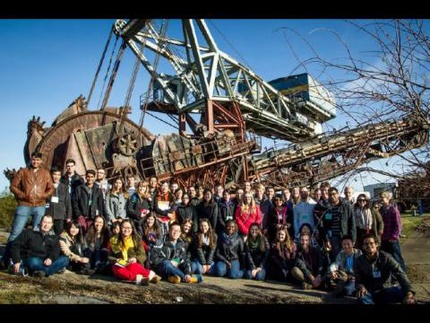 The third event was a camping trip to Fort McMurray with Aurie and Dane after I finished the first semester. I have been to Fort McMurray in November as a member of Oilsands Delegation. This time was much different. We drove 3 hours away from the city deep into a Jungle, in the middle of nowhere and stayed there for 2 weeks. This trip, as we termed, was “in pursuit of aggressiveness”. Living condition was just like old times.
Electricity was replaced by Kerosene, furnace was the wood we chopped down from forest, drinking water was made from snow, and food was the fish we caught from Hook Lake. The trip was amazing. We had a good time, survived, and caught tons of fish, and reached our goals. For me, I turned to love snow even though it killed my feet several times.

Time flies. My exchange time at the U of A is turning into the 2nd half. The first semester was satisfactory in terms of academic life, social life and extracurricular activities. I am get used to the cold climate even though I appreciate the opportunity to wear thinner. I love what I learn from school at school, some of which was extraordinary. I appreciate the food and people. All mates I worked with last semester were so professional and committed. Second semester has started for about a month and a half. School pushes hard as usual. Although workload increases 20%, I feel things are going in a favorable way. Getting used to life and norms here makes everything so enjoyable.
Lunar New Year is coming in a couple of days in the other size of the world. In Canada, we – a band of Chinese and Vietnamese student are hosting this event for oversea students in Edmonton this Thursday. On this occasion, wish you all a happy and successful year. 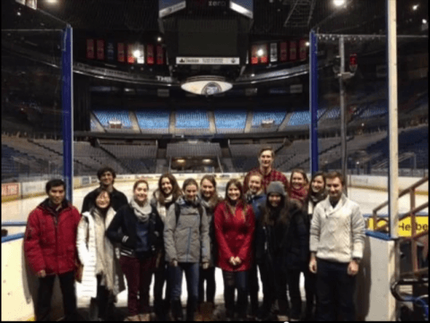